Fertility: Beating the clock and the cost

As our infographic shows, fertility is changing. Read the full blog below. 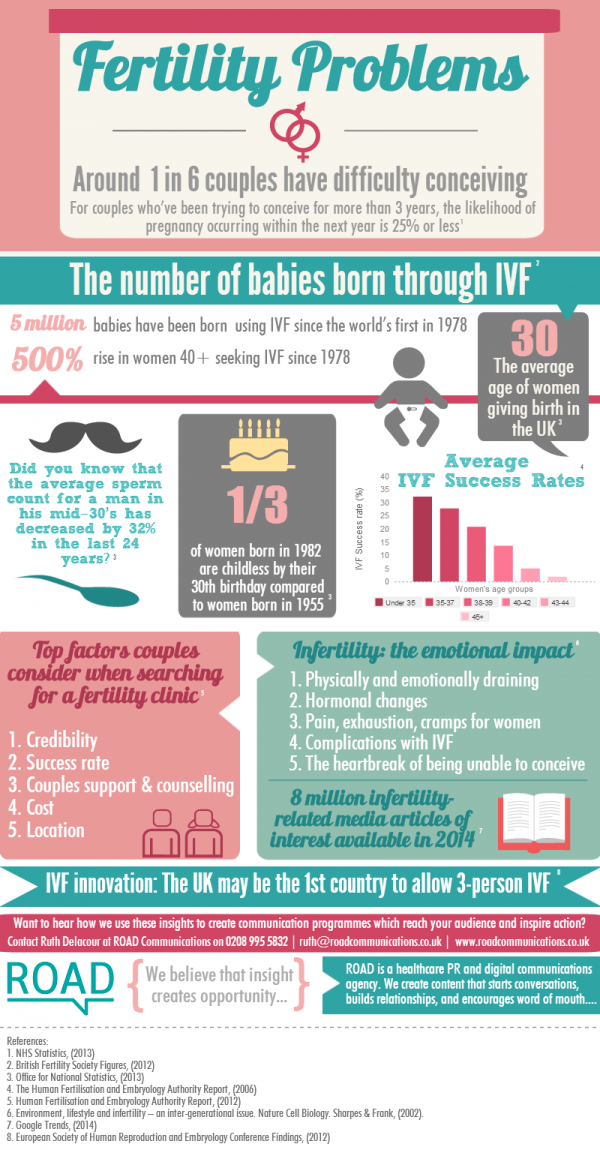 Ponder this: The average sperm count for a man in his mid 30s is now 50 million per millilitre - a decline of over 30% since 1989. That's a significant fall, especially if you happen to be trying to get pregnant, so it comes as no surprise that a 10 minute at-home sperm count check has just gone on sale here in Britain - one of several 'lab-at-home' diagnostic tests made available recently.

The causes put forward for 'the great sperm decline' are many, with the most probable being our move towards a sedentary life in the latter half of the 21st Century. Put simply, men sitting at their desks or on a comfy sofa makes for warmer testicles, which makes for lower sperm production. Also blamed is the rise in alcohol consumption, with sperm cells being especially sensitive to toxins - as are eggs. (Fertility experts will insist on couples cutting down their booze consumption if they're serious about having a baby.) Other theories put forward for the decline involve environmental agents such as potential hormone disrupting chemicals found in detergents and flame retardants. Whatever the causes, what's for sure is that our contemporary lifestyles don't favour abundant sperm production.

At the same time that sperm counts have fallen, many women have been putting off having their first child until they are in their mid 30s or 40s, even though their biological fertility starts to decline sharply after the age of 35. Add in the fact that women usually only release one egg per month, and suddenly men, with their 'factories' churning out millions per day, seem comparatively less threatened...

Without wishing to sound flippant, treating infertility is now big business, with three key changes delaying couples from starting a family: The extending of education into the early to mid 20s, the extreme increase in the cost of a home, and the rise in the cost of living. The average age for giving birth to a first baby is now 30 in the UK. Thus, as unromantic as it sounds, the unrealistic cost of affording a home is causing middle income Britain to delay having children.

The sad irony for many is that, physical and emotional costs aside, delaying conception in order to afford the cost of child-rearing can reduce fertility and - at the same time add - add the cost of IVF at around 5,000 a go. And potentially still no baby. Fortunately, less invasive and expensive options are available, although less data is available for these.

However, infertility isn't just a numbers game. It's a quality of life issue. Contemplate the psychological aspects of an absence of siblings (and cousins) in China. Consider the extremely low birth rate in Japan (1.4 per woman) with its corresponding impact on social care and taxation, as so few children are born to support the elderly. (Japan has the oldest population on the planet, with a median age of 46 and average lifespan of 84. A quarter of its population are over 65.) On the positive side, some note that reduced overall fertility is key to reducing the pressure on the planet's resources.

Demographics aside, though, the choice of when to procreate is in my opinion one of the toughest decisions women face today: A perfect storm of biology and economics. And that's besides the differing ticks of the 'biological clock' which can pitch the needs of men and women in very different directions.